Write a quick draft while it's fresh

As a bootstrapper, it's important that I spend enough time getting my product's name out there. For me, that means blogging. I've recently been writing a couple of paragraphs the instant that I have an idea for a post. That usually means writing "on your mobile" (or in my case, on my iPod).

I used to capture a one line summary of an idea in my todo list, with a view to writing the post up later. By the time I'd get around to it I'd often struggle to recover my thoughts and the inspiration would be long gone.

In the last week I've written several 200 word drafts on my iPod. They've since been edited into blog posts that I'm rather pleased with. If you have an iOS device the iA Writer app (iPhone/iPod/iPad) is great. 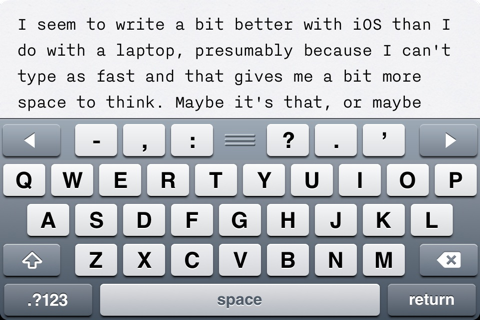 In this screenshot of the iPhone version you can see iA Writer's extended keyboard, with extra buttons for common punctuation marks, and cursor keys for navigating left and right in your copy. The iPad version (not shown) also has keys for jumping whole words at the time, which is a significant improvement over the default iPad keyboard.

I seem to write better with iOS than I do with a laptop, presumably because I can't type as fast and that gives me a bit more space to think. Maybe it's that, or maybe it's just because I'm using something a bit different.

Either way, iA Writer on your phone, sync'd with Dropbox is a great way to write the draft. I edit later on the computer, then post it.

Sent from my iPod