Does your version of gitk look like Windows 95's ugly step sister? Would you rather it used native buttons and widgets, and a half decent font?

I managed to get mine looking slightly less rough: 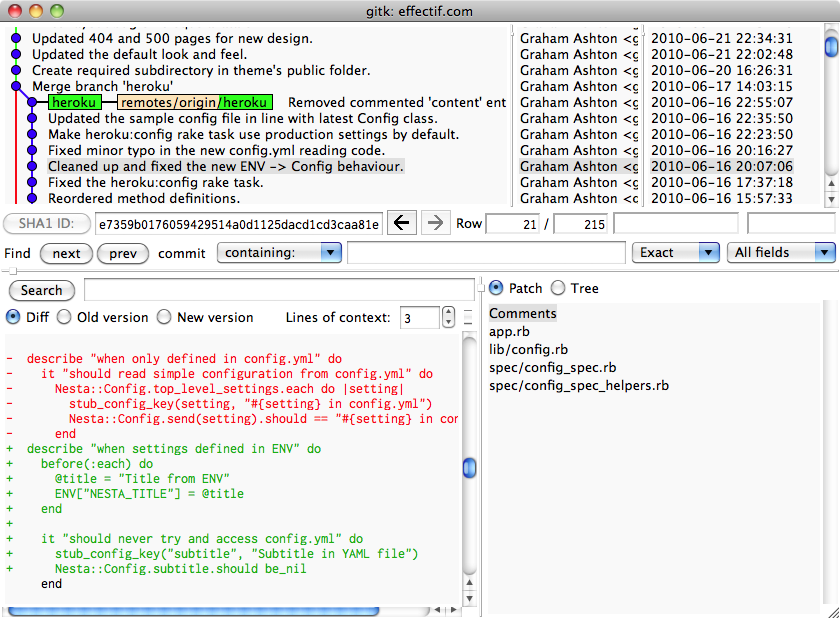 You need to launch gitk with the version of Tk that came with your Mac. A different version of Tk (that you might have installed with MacPorts or homebrew?) is probably what's making it look ugly.

If it works, avoid re-typing that the next time you login by adding an alias to your ~/.bashrc file:

From the next time you log in gitk won't look (quite so) crap when you start it from the command line.

If you've seen the PeepCode git screencast you'll be aware of this one already (all credit goes to Geoffrey). The first time you run gitk it creates a .gitk file in your home directory. Open it in your editor and change the first three lines to something like this:

If you've not got the Inconsolata font installed, Monaco makes a good substitute.

I wrote this post well over a year ago, but for some reason forgot to post it. I hope it'll be useful to somebody. Since then git viewers on the Mac have moved on considerably.

You could also take a look at: