The Joy of Painting with Ruby - Jason Cale

Jason showed us how to use Processing with Ruby. Processing is an open source programming language for people who want to program images, animations and interaction. It's written in Java, and is available to Ruby programmers via the ruby-processing gem.

The command you run to launch Processing via ruby-processing is rp5. So if you had some code that described your "art" in a file you could type:

You can also get rp5 to auto refresh your visualisation, modifying the images as you save new versions of your code:

When you're done you can create a packaged application (that works on Windows, Linux and Mac):

It was a very graphical talk, so there's not a lot I can do to get across the true depth of what rp5 is capable of, but if Ruby Manor videos should become available, definitely check this one out. Here's the basic layout of a ruby-processing script:

Check the Processing API reference to see what you can do in the setup() and draw() methods.

You can also load jar libraries (of which it seems there may be several useful ones), jRuby style:

Jason then showed us an example of how to grab a video feed from a web cam and display it in a window. He then modified it with Ruby, overlaying a grid of small ellipses over the top of the image. Downsampling, effectively. Here's a shot of the camera pointing at the audience: 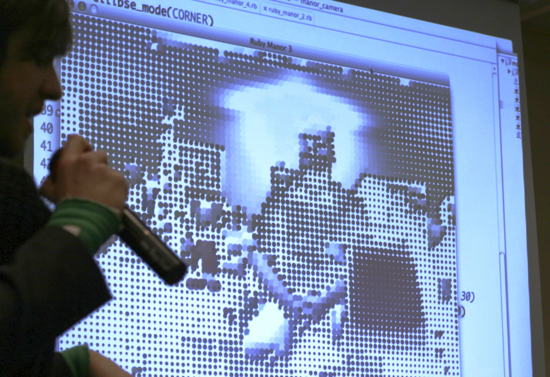 You can see how the size of each ellipse is a function of how bright the image is (as defined by line 58 of this script).

A few changes to the script later, Jason grabbed recent tweets from conference attendees and then used the words to represent a moving picture of the audience. The size of the letters varied as a function of the light entering the camera, as defined by the Ruby code (see the source code). Check the pic, it makes more sense than my waffle: 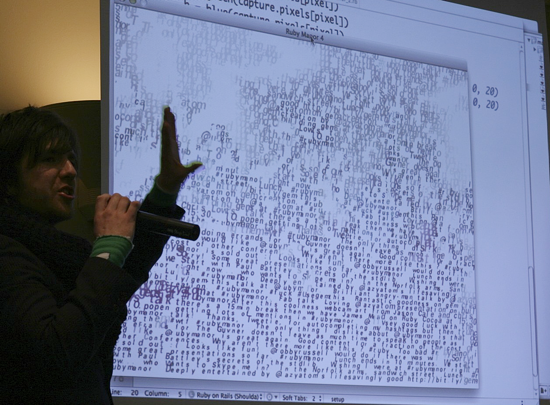 I enjoyed this; ruby-processing looks like a lot of fun. All the code for Jason's presentation is available on github.